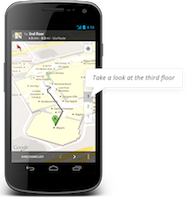 While reviewing a new Android smartphone, we came across a new feature in Maps (A map app by Google).
Google, perhaps, has included indoor maps for the popular city Singapore on the great Android platform.

This feature was introduced in the States in 2011. If you are inside a large building, you can use this app to find your way. By zooming in, you can see the floor plan showing the level down.
To date, only a few malls, such as ION Orchard, Centerpoint, Wisma Atria and Orchard Central have this new feature. For lost shoppers or tourists, this feature is greatly useful.
We checked out Google Maps on Windows and iOS, but it does not seem to work on these platforms. For the time being, the indoor maps seem to be working in specific locations in around 10 countries, such as USA, UK, Japan and Sweden to name a few. Singapore is not on the list at the moment.

If you have an Android device, you can make use of this feature, especially if you are in the locations mentioned above. Hope more cities will be added in the Google Maps down the road. For the time being, people are appreciating this feature.