Smartphones Batteries That Last Twice as Long to Arrive Soon 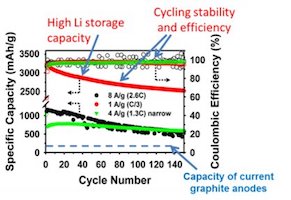 Late last year, researchers at Argonne National Laboratory and Northwestern University, both in Illinois, touted new technology that could double or triple the battery life of smartphones. Now, a Los Angeles, California-based start-up is bringing the new technology to the market.

Lithium-ion batteries, which are common in portable electronic devices, use graphite as anode material, but the large aspect ratio of the graphitic sheets limits the speed at which lithium can be inserted to the structure. In a paper titled “Flexible Holey Graphene Paper Electrodes with Enhanced Rate Capability for Energy Storage Applications”, researchers led by Northwestern’s Harold Kung explained that they have discovered a method to overcome this limitation by introducing nanometer-size vacancy defects (silicon nano particles) in the graphene sheets.

CalBattery is currently fast-tracking commercialization of Gen3, and aims to produce and sell its si-graphene anode material to global battery manufacturers in the next two years.